Sponsored by Samsung, in conjunction with the launch of their new Galaxy S mobile phone, the 45-minute set, starting shortly after 7 p.m., must have startled more than a few daily commuters during the tail end of the afternoon rush hour home.

With the threat of rain easing off, the band's (not so) secret show was introduced by Samsung as "Toronto's worst kept secret."

Initially, it was supposed to be a surprise show, but once word spread on Twitter and Facebook, there was no stopping thousands of Metric fans from filling the street at 45 Front St. E., just outside the VIA Rail entrance.

Some tried to get a better view on an elevated patio on the north side of Front St., but the Fairmont Royal York security wasn't having any of it. I saw a few cheeky young fans conspicuously pull out a can of beer on the stairs leading up to the patio. Hey, if there's no place to drink, you may as well BYOB, right?

Samsung representatives were on hand before the concert to show off their new phone, which officially gets released through Bell Mobility stores on Friday. The device looks and feels quite familiar if you've played with an iPhone 3GS.

It wasn't long before the crowd got restless and started chanting "Metric! Metric!" When Emily Haines and her band finally took to the stage, hundreds of cellphone cameras were whipped out for the photo op.

Metric have a new single, "Eclipse (All Yours)" that's featured in the latest movie in The Twilight Saga: Eclipse. It's no wonder that many of the fans present were much younger than I remember from the last time I saw Metric live at Edgefest.

The mood was pretty fun and relaxed for most of the show, with lots of singing along to songs such as Help I'm Alive, Gimme Sympathy and the still-popular Dead Disco.

Looking eastward from in front of the stage, it was quite a sight to see such a sea of heads happily bobbing to the music in the late afternoon heat, taking over Front Street for about an hour.

Towards the end of the show I witnessed a minor scuffle between a couple of girls at the front of the fenced-off area in front of the stage, as the excessive heat and humidity, along with too much crowding probably got the best of a few fans.

Most of the hundreds upon hundreds who turned out on the street to take in the free outdoor show appeared to enjoy themselves immensely. What a great mid-week musical treat.
SONY DSLR-A700, f/4.5 @ 40 mm, 1/1000, ISO 1250, No Flash
© ROGER CULLMAN PHOTOGRAPHY 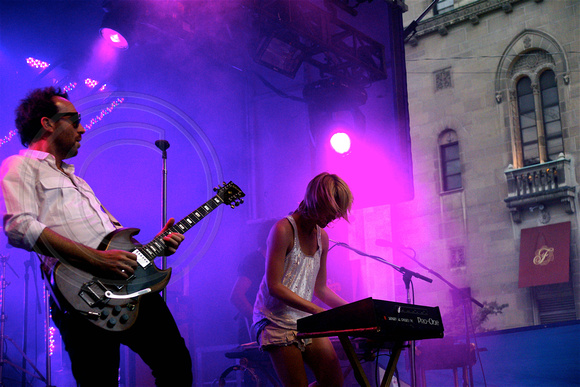