Madonna at the Air Canada Centre

More photos from the show in the blogTO concert review.

And here's my review of the show:

Madonna proved how out of touch she is with Toronto in her first of a two-night stand at the Air Canada Centre.

"Whassup, Toronto!" she shouted early on in her 110-minute set, a six-shooter in one hand microphone in the other. "Do you wanna die happy?" The next 20 minutes seemed to be a barrage of glorified gun violence in the name of art, or song (see "Gang Bang" and "Revolver"). Although it would be a stretch to call it much of either.

Perhaps she missed the news about the recent spate of gun violence in Toronto. Or maybe she felt no need to tone it down in order to give the audience (literally) more bang for their buck.

"Die Bitch!" she exclaimed, as she proceeded to gun down all her dancers on stage as we watched them collapse, one by one. Sure, it's only a fake gun and all. But the necessity to depict mass gun violence to sell a song doesn't sit well with me. And I don't even have young kids.

I guess it all evens out because Madonna also writes children's books. Am I right?

Madonna's MDNA tour had plenty of techno-wizardry. But that hardly makes for for an enjoyable concert experience alone.
Madonna's over-reliance on Auto-Tune, a.k.a. the "Cher Effect" made a lot of her songs sound canned and emotionless. Maybe that's the point.

Sure, she's still got her old hits to rely on. But, aside from an a Capella version of "Like a Virgin," where she writhed on a piano in the middle of the catwalk that jutted out into the audience, her old songs weren't much to celebrate.

"We're all in one room to celebrate love, correct?" Madonna shouted out at one point. Then why all the gun violence, I began to wonder. "The only thing we have to get rid of is our big, fat f---ing egos," she said. "We're all the f---ing same. If we don't start treating each other with human dignity, this shit is going down and we're all going down with it. Am I making myself clear?"
But it became evident as the concert wore on that she wasn't about to lose her big ego.

I felt embarrassed for the fans who brought young children with them.

"My dancers are looking at me like I'm crazy," she said. "I am crazy because I didn't have a holiday this summer." Cue "Holiday," which was cut short when she tried to get the crowd to sing along the words "in every nation," but fell flat. "I'm gonna teach you how to sing if it f---ing kills me," she exclaimed. Hardly a happy, stadium-wide singalong.

Madonna's series of songs that included "Justify My Love," "Vogue" and "Erotica" saw her prance about on stage in a black and white outfit. She started off wearing black pinstripe pants over heels, a black cone-bra and matching corset over a white blouse.

By the end of "Erotica," one of her buff, shirtless dancers had stripped her to a bra and pants, which she pulled down to show off her ass cheeks sticking out of her thong. The words "FREE PUSSY" were written in large letters on her back. This drew the most cheers of the night.

But it was meant as a nod to the recent Pussy Riot hooliganism conviction in Russia -- "Not FREE, as in 'all-you-can eat'," Madonna clarified.

One highlight for me was when Madonna performed "Masterpiece," a song that she said she wrote for a film that debuted at TIFF last year. Surrounded by actual musicians on stage (an acoustic guitar and drummers) the song was a rare gem in the evening's barrage of old hits and new misses.

When Madonna strips down all the artifice and grand spectacle of her stadium show, I found her much more effective at resonating with her audience. Maybe Madonna just desperately needs a holiday.
SONY DSLR-A700, f/6.3 @ 300 mm, 1/640, ISO 1600, No Flash
© ROGER CULLMAN PHOTOGRAPHY 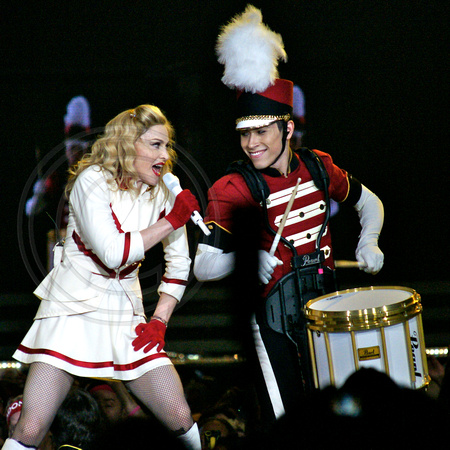