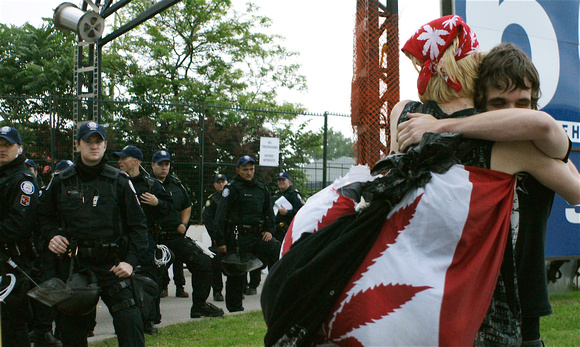 Toronto, Ont. June 27, 2010: Joshua Edgar, 18 (right) from Napanee, Ont. hugs his friend Matthew Bowers, 17, from Belleville, Ont. after being released from the facility at Toronto Film Studios, where a makeshift jail was set up to hold all the people detained by police during the G20 protests.


"This was the first time I've been arrested (for Breach of Peace) and I was just standing around, doing nothing," said Edgar. "I'm not a huge badass, but I've done some drugs and petty theft... just candy bars."

"I can't believe they spent all that money on those dog cages they put us in," said Bowers, moments after his release.

"We were kept in separate cells with six others in six-foot-by-nine-foot cages with concrete floors," says another detainee, Alexis Cummings, 27, who was visiting from Brooklyn, NY. "They made us all take our shoes off and cranked up the air conditioning all day.

"All they gave us were small cheese sandwiches every five hours or so and weren't given enough water.... I'd rather be in (New York's) Riker's Island prison. What you have here is completely wrong."
© ROGER CULLMAN PHOTOGRAPHY
Powered by ZENFOLIO User Agreement
Cancel
Continue